Drinking water on walk: no

This is the western part of the Tisseon crossing. Starting from the chapel of Panagia next to the asphalt, we climb towards the Karatassos pit and then, moving along the ridge to the west, we reach the village of Trikeri, from where we finally descend to finish in Agia Kyriaki. The route has spots that offer excellent views of the Aegean sea and Pagasitic gulf.

From Panagia to Karatassos clearing we walk through mixed Mediterranean vegetation that offers enough shade, but then the holly trees dominate on stony ground, as is the case in the rest of Tisseon. This makes walking more tiring and at the same time requires continuous attention, because the stones slip treacherously if wet from the morning moisture. And the holly trees (quercus coccifera) have a tendency to flare up in the absence of a goat flock, making it difficult to pass. Nevertheless, the route is expected to be cleaned and signposted within 2023, along with others, with money from the European Leader program. 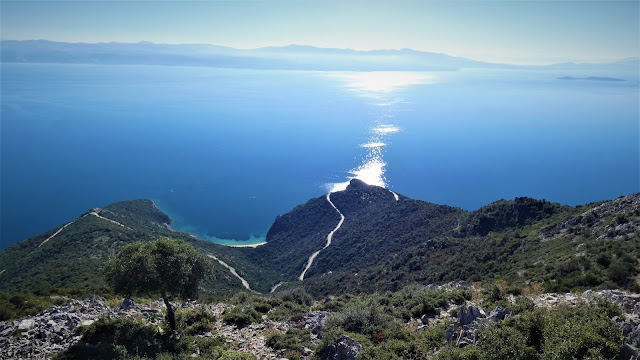 Note: the new recording of the route near the peak of Tsitsourava at 424 m. is more correct, easier and offers a much better view than the previous recording, shown on the maps so far. We recommend it.

On the road from Milina to Trikeri, after the fish farm, we see by the road the sign (in Greek) ΙΕΡΟΣ ΝΑΟΣ ΠΑΝΑΓΙΑΣ, meaning "Holy Church of Virgin Mary (Panagia)"). The church is located a little lower, close to the sea and is not visible from the asphalt. Next to the road there is also a fallen marble commemorative plaque that refers to the battles fought here by the rebel Greeks, led by Karatassos, with the Turkish army under pascha Kiutachi in 1823.

A signpost on the other side of the road marks the beginning of the path. It climbs through a maquis forest. We pass a first small uphill glade and soon we come out to a large, elongated clearing, named after Karatassos. Approximately in the middle, there is a cairn marking  the path that leads to the peak Evzonos (644 m.) to the left. 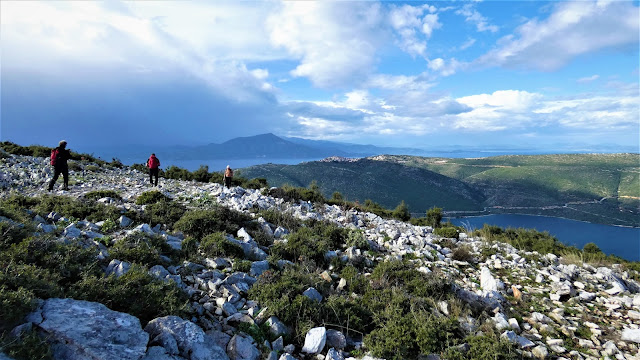 We do not follow this, but continue straight ahead on a westerly diretion. From the upper edge of Karatassos glade we find a path with red markings, that heads west-southwest. We pass through a couple of other clearings and eventually we reach a small rocky plateau. If we stand on the edge of the cliff that is to our left, we will have a wonderful view towards the Aegean. 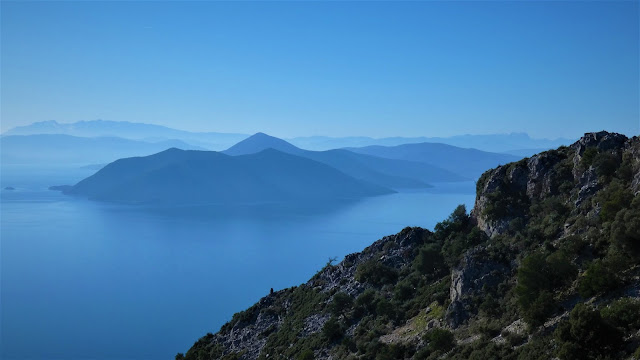 From here on, the path becomes unclear, as we climb into stony ground with holly oak vegetation. We walk close to the edge of the cliff in the direction of the pillar of the Tsitsourava peak (424 m.) and the wind measuring mast next to it. Note: this beautiful and unique natural environment is in danger of becoming a wind  farm by greedy investors,  thus suffering an irreversible damage. Let us hope this will never be allowed to happen. 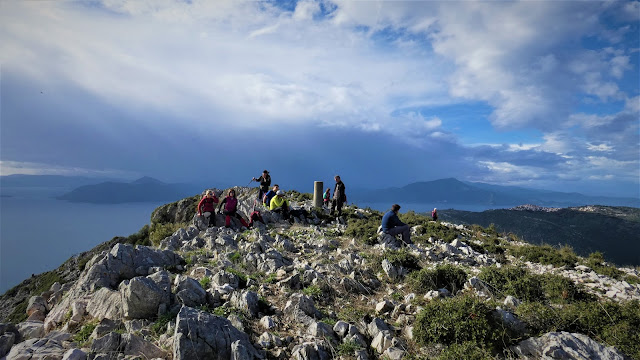 After reaching the top, we continue in the same direction, passing close to a cairn on our left.
Finding a passage through the holly trees, we descend and reach a small glade at the foot of the hill in front of us. From there, moving in a westerly direction, we climb on a narrow goat-path, pass by another small glade and climb to the top of the next hill.
Keeping the same direction, after a while the path brings us to another hill (Kastro (Castle), 281 m.), where we meet a wall that extends for quite some time on the ridge and we walk next to it. This was built during the Greek revolution, at the time of the battles with the army of  pasha Kioutachi in 1823 (more information can be found in the book of  Kostas Liapis "Tα Παλιόκαστρα του Πηλίου'', Ta Paleokastra tou Piliou-The old castles of Pelion (in Greek, Volos 2010).
Continuing in the same western direction, we pass by another mast and further down we come out on a dirt road, at the location called Diakopi, near a pen. In a few meters we meet the asphalt that goes to Agia Kyriaki on the left.
Here in Diakopi we have two options: either we will walk for half an hour downhill on the asphalt to go to Agia Kyriaki, or we will go straight uphill on the dirt road, which will take us to the cemetery of Trikeri and then, as a stone paved road, to the village square (a 2-3 meter section of the old kalderimi still survives near the cemetery).
From the square we will descend on a nice cobblestone road towards Agia Kyriaki. For this second option, which we followed here, the time from Diakopi to Agia Kyriaki is one hour and 15'. In the picturesque port of Agia Kyriaki, at least one restaurant-café operates all year round.
Posted by Kyriakos Stathakis at 8:12 PM