Introduction
Pelion stands out among the mountains of Greece. Although it is not very high (its highest peak, Pourianos Stavros, measures 1624 m.), because of its geographical position collects a lot of snow in winter. This results in plenty of spring water, creating high potential for human settlement: Pelion is the most densely inhabited mountain of Greece. It also remains overgrown with vegetation, just as it was in antiquity, as mentioned in poems of Homer and Hesiod. Its position inbetween two seas, the Aegean sea and Pagasitic gulf, means that mountain and sea are always very close to each other. Not many ski centers are only a few hours of walking time away from a beach, like  Pelion Ski Center at Chania.
This combination of mountain and sea, mythology and history, natural beauty and human works (old villages, monasteries, stone bridges, fountains, cobblestone paths), coupled with availability of both summer and winter touristical infrastructure and the presence of a large city nearby (Volos), is what makes Pelion so special. It is a paradise for walkers and nature lovers. Such is the multitude of its walking routes, that one can walk on a different route every day for three months and still have new walks to explore.
Near the sea or the mountaintop, in dense beech, chestnut and oak forest, mediterranean maquis vegetation or olive and apple orchards, lasting from one up to eleven hours, circular or trekking from one village to another, Pelion has it all for everybody in terms of walking, except only for alpine zone at high altitudes. Skiing, mountain biking, canyoning, climbing, horseriding, diving, swimming, sailing, caving, kayaking, collecting herbs and mushrooms, all these activities and more are exercised in the Pelion area.


History
There are testimonies of human presence around Pelion from prehistorical times. The acropolis at Sesklo and Dimini near Volos were inhabited from Neolithic period (5th millenium BC) until the Mycenean era (12th century BC). Latest data identify the Mycenean settlement of Dimini with the ancient city of Iolkus. Some other ancient settlements around Pelion were Pagasai, Amfanai, Olizon, Neleia, Koropi, Spalauthra, Orminion, Kasthanea, Glafyrai.
At the hill of Goritsa next to Volos lay the ruins of a hellenistic city built in 4th century BC, which was abandoned a few decades later and even its name still remains unknown. In 294 BC, king Demetrios of Macedonia founded the city of Demetrias at modern-day Pefkakia near Volos. Ruins of its walls, the palace, water system and the ancient theatre can still be seen today. Demetrias became the favourite residence of the kings of Macedonia and later was the capital of Magnesian Alliance and an episcopal see under Roman emperor Constantine. The city was finally abandoned by the late byzantine period (13th-14th century AD) or possibly even earlier.
During the byzantine period, the inhabitants of Demetrias moved to the nearby Castle of Volos (some remains of it can be seen at the city hill of Palea) for better protection from barbarian raids and pirates. Slavic people raided and eventually settled down in Pelion, as testified by a multitude of Slavic names still surviving, like Zagora, Goritsa etc. The name Golos (later Volos), of Slavic origin too (from golo=naked or golosh=seat of administration in Old Slavonic), is first mentioned in written archives of late 13th century. The basis for several eminent Pelion villages (Zagora, Makrinitsa and Portaria) was set in 12th century, around the monasteries of Sotira, Oxeias Episkepseos  and Drianouvena  respectively. Other Pelion villages also developed following that example. Pelion was full of  monasteries at that time, very much like the Athos peninsula, like a second ''Holy Mountain''.

The Ottoman Turks seized the Castle of Volos in 1423 AD and all Christian people living there were forced to abandon it and move higher up the mountain. Indeed, during the Ottoman period (15th to 19th century) the Turks preferred to settle down at fertile low grounds, such as those of Lechonia and Argalasti, leaving to the Christians the mountainous slopes of Pelion, more difficult to cultivate, that were of no interest to them. The developing mountain villages remained essentially self-governed, being required to pay an annual tax and left otherwise alone by the Turkish authorities. That privilege layed the ground for the thriving of Pelion, reaching its climax in 18th and 19th century.
Groups of skilled stone builders from Zagori region of Epirus, Northwestern Greece came and built the mansions, monasteries, bridges, fountains and kalderimis (cobblestone paths) that we admire today. Products (mainly olive oil, olives, fruits, chestnuts, silk, timber) were carried by mules through the kalderimis down to the sea (every village had its own beach used as port) and shipped to the major ports of East and West. Zagora was famous for its excellent ships. On donations by wealthy merchants, higher schools were founded, like Ellinomouseion in Zagora and the School of Milies.
In 1881, Pelion along with the whole region of Thessaly was swiched from the Ottoman Empire to the young State of Greece. The modern city of Volos outside the castle had been founded just forty years before, when wealthy merchants were granted permission to build houses and churches outside of the castle by the Sultan himself in Constantinople (Istambul), provided of course that a significant sum of money be deposited to the Sultan`s personal account. Thanks to its position as the main port of Thessaly for importing and exporting goods, and to the subsequent building of much needed port and railway infrastructure, the young city of Volos thrived under Greek rule.
At the end of 19th century, it was decided to build a narrow railroad of 60 cm gauge (Decauville type) from Volos to Pelion villages, originally scheduled to extend up to Zagora. Evaristo De Chirico, an Italian engineer, father of the eminent surrealist painter and sculptor Giorgio de Chirico (who was born in Volos), was put in charge of the project. Starting operation in 1895, the rails finally extended up to the village of Milies in 1903 and the train remained in regular service until 1971. Since 1996, it operates again as a heritage railway for tourists during the summer season (April to October) -a must for all visitors.
The ravages of 2nd World War, the ensuing Greek Civil War and the massive earthquakes of 1955-57 all took their toll. Civilians were executed and villages were burnt down by the German occupation forces (Milies, Drakia, Agios Vlasios, Kanalia etc.- the village of Ano Kerasia still remains in ruins). Volos lost to the earthquakes most of its fine neo-classical style urban mansions, sadly replaced by blocks of flats. Following the development of mechanised transport, many of the old kalderimis and paths were destroyed and converted to roads. The villages of Pelion faced a post-war economic decline, mitigated by the gradual rise of tourism from the 70`s and on.
Nowadays, Volos is a lively modern city of about 150.000 inhabitants, seat of the University of Thessaly, and Pelion seems to strike a balance between land cultivation and tourism. Provided that its strong assets are being protected and used to advantage, Pelion should be able to justify its calling as a ''paradise'', bearing always in mind that no paradise on earth can be perfect.

Posted by Kyriakos Stathakis at 4:09 PM

Email ThisBlogThis!Share to TwitterShare to FacebookShare to Pinterest
Labels: mythology and history 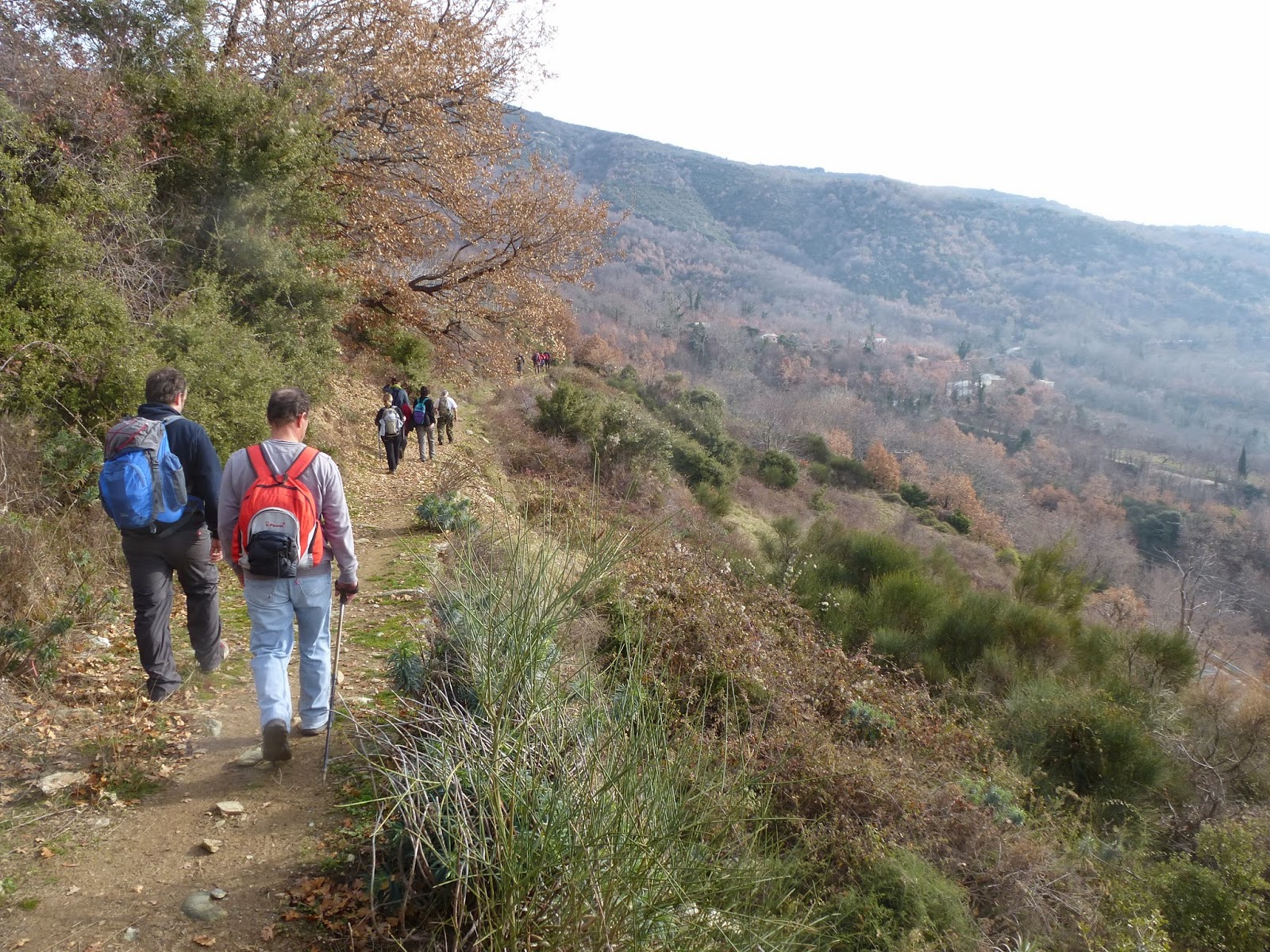 In this walk, we are following the historical old mule track which connected Volos to the villages of East Pelion (Zagora, Makrirachi, Kissos etc.). We start from the village of Alli Meria at the outskirts of Volos, because the first section of the original route has become an asphalt road and therefore is unpleasant to walk. We can go from Volos to Alli Meria by city bus nr. 7 (end of the line) or by taxi and return from Hania by regional bus (www.ktelvolou.gr). Another option is to continue walking from Hania to Zagora or Anilio, Kissos, Tsagarada, Mouresi, Agios Lavrentios, Agios Georgios (see the respective routes). At Hania there are hotels and restaurants open all year round.

Starting from the drinking water fountain at the square of Alli Meria, we walk on a narrow flat stone paved road, formerly a kalderimi (cobbled stone path). We pass by Hadziargiris` imposing old mansion on our left, then go right at a T-junction, cross the asphalt below to the small chapel of Agii Anargiri and continue uphill on a concrete road. From the end of the road, we walk next to the fence of a mansion which is on our left, having on the right the ravine of Anavros, overgrown with plane trees.
The kalderimi opens to a road junction near a tank of the water system and we take the uphill road that has a black plastic water pipe on its side, which serves us as a guide. Further up, there is another water tank where the black pipe ends and we get to an asphalt road. After ten meters on the road, we find the continuity of the kalderimi on our left. It opens to another asphalt, on which we walk uphill  and after fifty meters we notice the wide kalderimi on the right side going steadily uphill. We reach the small square of Katichori called ''Pazarouli''. A little further up, there is a drinking water fountain on the side of the road. Here we take the concrete road that ascends steeply next to the fountain. This is the old kalderimi, now covered with concrete, which avoids passing through Portaria to save time (we can still go to Portaria if we want-see the route Portaria-Alli Meria).
The concrete track opens to the main asphalt, just under Portaria Hotel. From the small parking area on the right, we can see steps climbing up to a parallel asphalt road a little higher. We walk on this to the right (to the east) until it leads to a christian school's summer camping area (ΓΕΧΑ), and continue on a narrow dirt track next to the upper side of it. This used to be a proper kalderimi until recently, but was sadly destroyed to lay an underground water pipe...One wonders, why are the authorities consistently failing to protect the cobblestone and turn a blind eye to its destruction? Why can`t they realise its value at least for the tourists and visitors?

Anyway, a section of kalderimi survives further on, then it is covered by concrete next to a cottage and then appears again, climbing into chestnut forest. On our way is a drinking water fountain and a kiosk next to Agia Triada chapel. From some spots, we enjoy beautiful views to Portaria village and the sea down below or to the peaks Agriolefkes and Schitzouravli above to the east.
We cross a dirt road and after a little while reach a watering trough. After this, the kalderimi takes a left turn. Here a path goes straight ahead towards Drakia, marked with blue paint. We continue uphill on the kalderimi and reach the main asphalt to Hania, next to another watering trough and a telecommunication antenna. We walk a few meters on the asphalt downhill (attention, downhill) and find the path-kalderimi that continues parallel to the road a few meters below on the right (follow the red marks). Eventually we join the asphalt again for 50 meters. Just before a sharp right turn, noticing the handmade sign to Hania (in greek, "Χάνια"), we take the narrow road to the left, initially among apple orchards, then becoming kalderimi into beech forest.
Eventually, the path-kalderimi opens to a dirt road next to a football pitch. We take this road uphill and soon reach Manthos hotel. We continue on the same direction and pass a small stream, finding a small stretch of the original kalderimi near Zisis hotel. After that, we walk on an asphalt road for a few meters and then go left uphill on a dirt track to reach the main asphalt at Hania just above us, at the corner of Kokkinis hotel-restaurant (To hani tou Kokkini).

Posted by Kyriakos Stathakis at 8:46 PM No comments: