Powered by Wikiloc
This is the main route connecting Pinakates to the sea and to the train of Pelion. Ιn the past virtually all transport of people and goods used to pass by this. Most of the original cobblestone (kalderimi) still survives, only small sections are now covered by concrete or asphalt.  The neighbouring villages Vizitsa and Milies also have similar kalderimis to Kala Nera crossing the train rails. With that in mind, one can create several circular walks, with duration between two and five hours. Pinakates is also connected by a signed path to Vizitsa in less than an hour, and Vizitsa is connected to the train station of Milies. 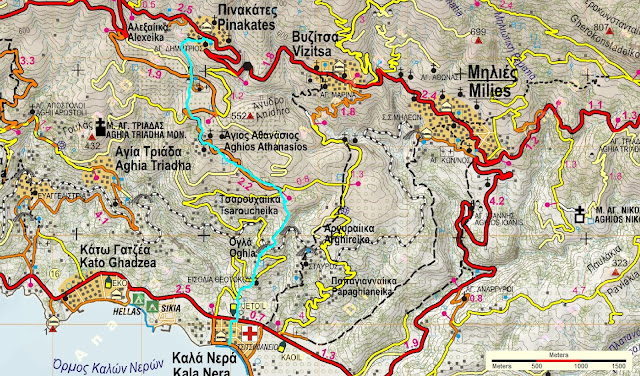 Starting from the seaside at Kala Nera, at the corner of ''Roumeli'' hotel-restaurant, we walk on the asphalt away from the sea, reaching the main asphalt road in a couple of minutes and follow it to the right for fifty meters. Just after the gas station, we find the continuity of the route on the left side of the road, along with a couple of signs. Initially, it looks like a narrow earth road, but soon the kalderimi appears. 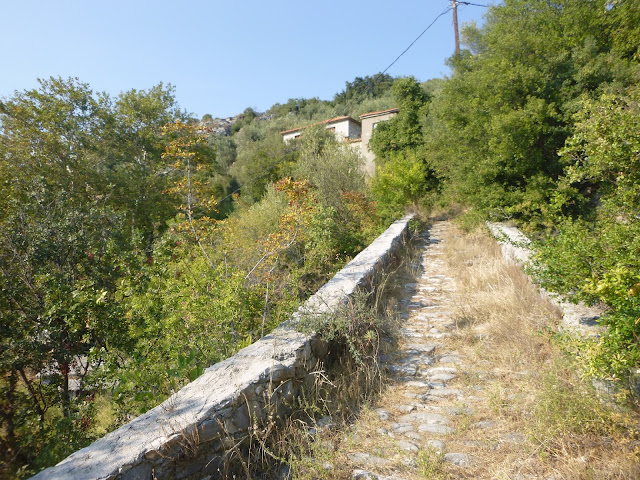 On our way up, we cross an earth road near a bend, and then reach the church of Panayia (Virgin Mary), at the settlement called Oglas. Most people of Pinakates preferred to stay here in winter, to  be nearer to their olive groves and to avoid heavy winter snow, which is not unusual in Pelion. This was common practice in most Pelion villages. Nowadays, it seems winters are milder than they used to be, old people say.
After the church, the kalderimi gets covered with concrete for a short section, until we cross a road. Then it reappears but a little higher up gets covered again. Soon it opens on a bend of a road, next to a concrete building of the water system. We take the left branch and soon find the kalderimi again on the right, climbing with zigzags. A little higher up, we come to cross the train rails over an arched stone bridge. A branch of the kalderimi to the left goes down to the rails and to the old train stop that used to serve Pinakates.
The kalderimi continues to climb and we have nice views over Kala Nera and the sea. Reaching a cottage, it becomes cement road, which then takes a left turn. We walk past another cottage with a characteristic stone roof and then join a wider road. After a left turn of the road, we easily notice the kalderimi on the right side and follow it, crossing the road three times. Further up, the kalderimi is covered by concrete and in a few meters joins the asphalt road. At this junction there is a walker sign on a post. We go past a cottage and the kalderimi continues parallel to the asphalt, a few meters to the right. Here it is overgrown, but still remains passable. It joins the asphalt again and then branches off to the right, crosses the asphalt one more time and continues on a straight line.
We come to a junction with a road from the right, which goes to the church of Agia Kiriaki, and then come to cross the asphalt for the last time. We can now see the  houses of Pinakates. On the right is a large shrine and a drinking water fountain. Opposite on the left is an old threshing floor (''aloni''). Straight ahead the kalderimi continues, wide and clear, along with some old telephone posts, to cross an overgrown streambed over a concrete bridge.
After the bridge, the kalderimi climbs sharply. We come to a junction, where we go right and at the following one go left uphill, following the red dots. Finally, climbing some steps, we arrive to the picturesque square of Pinacates, dominated by the huge old plane tree at the middle. The notable neo-classical style marble drinking water fountain was  built in 1894 with donations of wealthy expats from Alexandria, Egypt. There is a cafe-restaurant at the square, open all year round.

Posted by Kyriakos Stathakis at 5:04 PM No comments: