Drinking water on walk: no

This walk has a particularity compared to all the others described in this blog: About half of it is done without a path, walking freely on the bed of the stream of Kaliakouda into the gorge, stepping on rocks and stones that can be slippery from the moisture (attention!). In three places, a bit of climbing is required on the rocks that block the passage, which in turn requires from participants to be in good physical condition and have some relevant experience. The stream is generally dry without water, except when the snows melt in the spring and when there is a recent downpour. It goes without saying that in these cases, and even if there is only a simple chance of rain, the walk must not take place for safety reasons.

The ravine of Kaliakouda (or Kseria) takes its name from the sources of Kaliakouda located higher up, from which the city of Volos gets drinking water. Its beginning is at the peaks of Pourianos Stavros (1624 m. - Pelion`s highest) and Kotroni (1550 m.). There are four stone bridges built in this large ravine. In this walk, we meet the two lower ones on our way (Louziniko and Alevizou). The other two are the bridges of Leshiani and Karia.

So, we start from the stone bridge of Louziniko, which is in good condition. To get there we exit the Volos Ring road towards Fitoko. Shortly before reaching Fitoko the road forks and we go left on a narrow asphalt (attention). We can either descend immediately to the bed of the ravine, or initially walk through an olive grove parallel to the bed and then descend, as we did here. 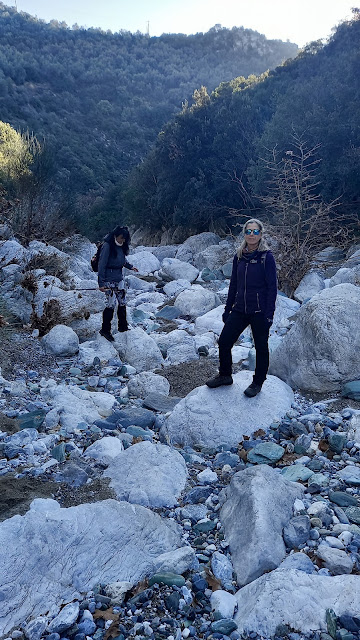 We are walking either on smooth, sandy ground, or on and between rocks, some of which are impressive with their colors, or even on large rocks that in three cases also require a bit of climbing ability to climb to a height of a few meters. 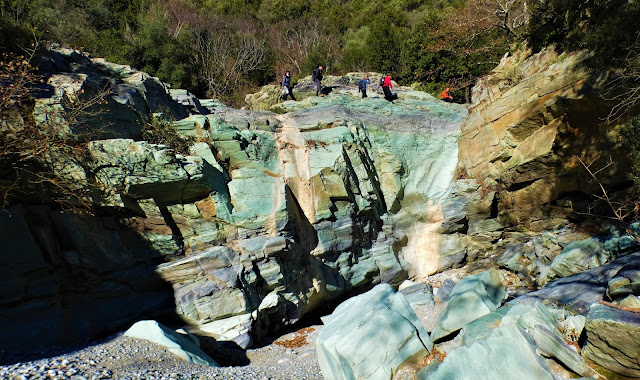 Having covered a distance of about 7 kilometers in these conditions, we eventually reach the bridge of Alevizou. Unknown year of construction, by unknown masons - most likely coming from Epirus region in Northern Greece - this bridge is the second of four bridges built at the Kaliakouda ravine (the other three are of Louziniko, Leschiani and Karia). It got its name from a local landowner who paid for its construction. The span of its arch according to Haratsis is 9.2 meters and the height is only 2.25 meters.

The former president of Makrinitsa community, Spiros Kouikoumis, told Nikos Haratsis: ''I remember this bridge was very high, so much so that when we passed over it we were afraid to look down. The stream was very deep at this point and the rocks on the banks steep and high. But now it's been several years that the water has brought down a lot of gravel and rocks and it is in danger of  blocking from below" (source: Nikos Haratsis "Stone Arched Bridges in Pelion", in Greek). 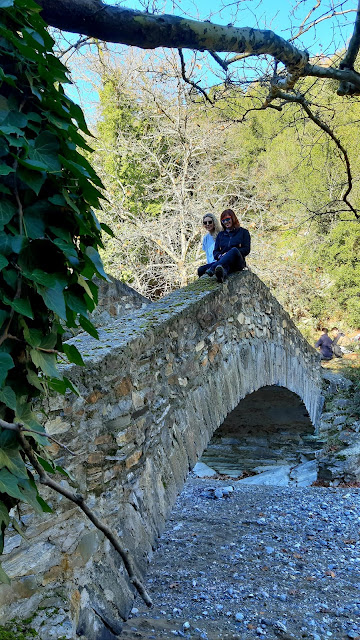 The bridge was for several years in a bad condition, ready to collapse. In 2009 it was repaired. However, this repair, in the way it was done, significantly altered its character and its current form is far from the original. Also, the addition of low side walls theoretically increases the resistance to the flow of water, so that in the event of a heavy rain there is danger of it being swept away by the flooded stream. 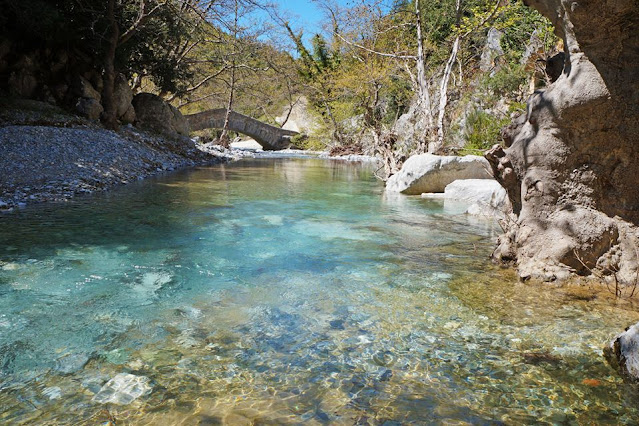 Leaving the bridge, we go up the dirt road to the left. At the second sharp right turn above, there is a path with blue markings in a northwesterly direction, incorporating a few meters of cobblestone, that brings us to Agios Athanasios church. 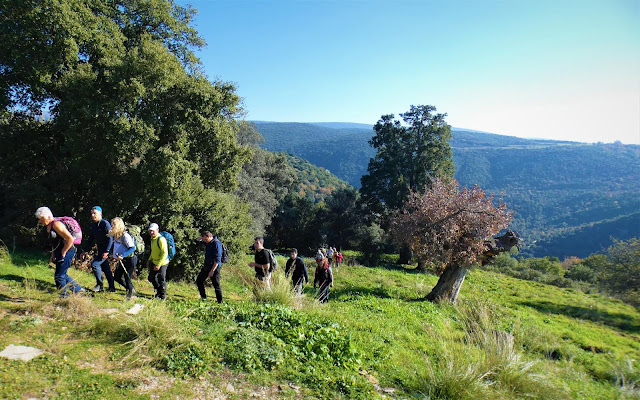 Below the church there is a sloping plateau, rather an abandoned field. Walking through the plateau in a southwesterly direction, we find a path that goes straight ahead smoothly in this same direction. Finally we come out on a dirt road, on which we walk crossing another large field, in the middle of which there is a ruined hut and we pass right next to it.

Further on, as we walk along the right edge of the field, keeping an eye out for the red arrow on our right, we leave the road (attention!) and join a path that crosses a small stream and then emerges into a smooth clearing with a few trees. Here the path becomes a bit unclear, so we watch out for the red markings on the trees. Our direction remains generally southwest.

Descending between holly trees, we finally come to a small dry gully at the location Kokkinovrachos. Here we come to join the route Louziniko-Kato Kerasia (notice the signpost).

We now walk following the stream, which below joins another and finally joins Kaliakouda (Kserias)  while we, after crossing the small stream, walk on a path built on the right bank of the large stream. After a bit of cobblestone, the path becomes a rural road and finally we arrive back at the bridge of Louziniko, from where we started.

Posted by Kyriakos Stathakis at 1:03 PM No comments: