The first part of this walk is the same as to the walk Milies-Tsagarada. Reaching the chapel of Agios Dimitrios above Xourichti, we walk down through the village and continue to the excellent beach of Milopotamos, where our walk can end with a swim at the Aegean sea. There is a restaurant at the beach, open from Easter to the end of September. We have to take into account the fact that the last part of the walk below Xourichti offers little shade from the sun. Also, below the quarry we must exercise caution climbing down the path because of many loose stones on it.

The library building, inscripted with the words ''ΨΥΧΗΣ ΑΚΟΣ'' (psychis akos, “therapy for the soul”) is found just above the square in Milies and immediately to its right begins the kalderimi towards Labinou-Xourichti-Tsagarada. We start up this and immediately pass a covered spring water drinking fountain on our left. We continue straight ahead, climbing past the houses of the village in an easterly direction. The kalderimi zigzags next to a plane tree, diagonally crosses a cement road and continues uphill in the same easterly direction. We keep following the red marks and ignore any downhill kalderimis or roads crossing our path.
A little further on, we continue on a cement road as we leave the last houses of the village behind us and walk between apple orchards. At the second left hand bend, we leave the road and turn right onto a kalderimi next to a concrete water channel and water pipe. On our right is a row of cypress trees. We pass a stream bed over a small concrete bridge and continue on a lovely kalderimi/path. 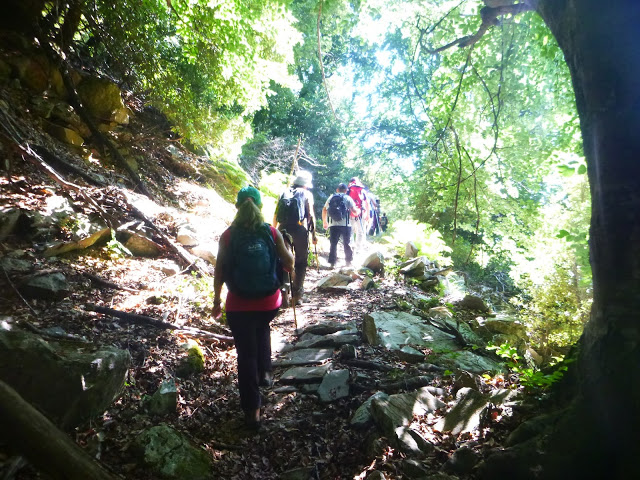 We soon come to a crossing, at which the signpost indicates that we should turn up to the left onto a wide path, which becomes a kalderimi a little further up. We come out at an angle onto a kalderimi/road and continue uphill. In a short while, we meet and cross a wide earth road and continue in the same direction between chestnut trees. Where a road comes in from the right, we continue ahead in a northerly direction and reach a wooden kiosk at the location called Kefalas. From here, to the right of the kiosk, a path leads down to Labinou (see the route Milies-Labinou beach).
We walk a bit further on the road, which eventually ends and continues as a kalderimi that leads into a beautiful forest with evergreen holm oaks initially, then in beech forest with some plane and chestnut trees. Moving in a generally northerly direction we pass the Kerasorema stream bed and ascend gently for a bit until we reach the highest point at 790 meters. This part through the forest is beautiful and evocative and one wishes it could last forever!
The kalderimi begins now to descend (we ignore two paths to our right) and we reach a wooden bridge over the Varsami river bed. After the bridge, we leave the forest and walk uphill on  an earth road in which sections of kalderimi are visible from time to time until it goes off to the right of the road. 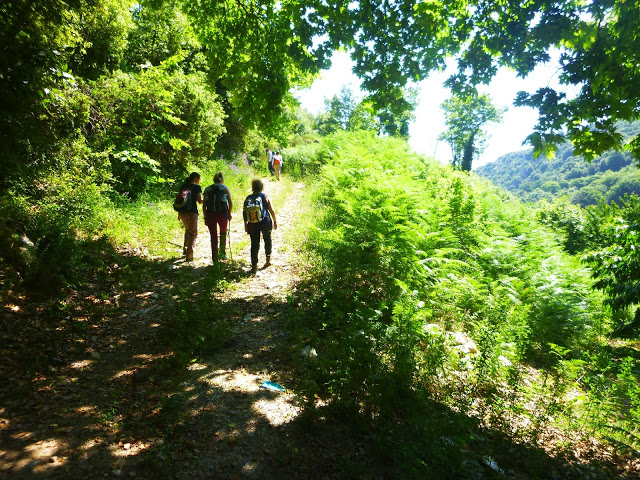 We are walking now in maquis vegetation and pass next to a couple of orchards. The kalderimi then opens to a crossroads. We take the middle road and in a few meters find the humble country chapel of Agios Dimitrios, a suitable place for a stop.
We continue on the road for 150 meters and at the point where it takes a left uphill bend, we leave it to the right to find the kalderimi. After 30 meters there is a signed junction, where we go right on a wide earth path. We descend next to a water tank on our right side (the path is overgrown with grass and brumble) and then next to a house on our right. We join a cement road which goes through the village of Xourichti and soon reach the tiny square with the spring water fountain. Xourichti has always been a backward tiny village, built on rocky, infertile ground, its people struggling to earn a living.
Reaching the church we prefer to take the kalderimi that goes off at an angle to the left, on a parallel course to the cement road. Further down we cross the road at an angle to the right, at the point where it takes a sharp bend, and continue in the same northeasterly direction on a stone paved track, passing by the chapel of Agii Pandes (All Saints). At the point where the concrete track takes a sharp left turn, we go straight ahead, entering the path again.
It eventually opens to the main asphalt, on which we walk to the right and reaching the junction we take the secondary asphalt to the left, with a sign to ''Hotel Faros''. The original path runs parallel to the road on the right, but is not viable. The road takes a right turn and after 100 meters we take the earth track on the left, going down to a quarry. At the end we find the continuity of the path going down steeply for a few meters (here steps should be dug to facilitate descent). 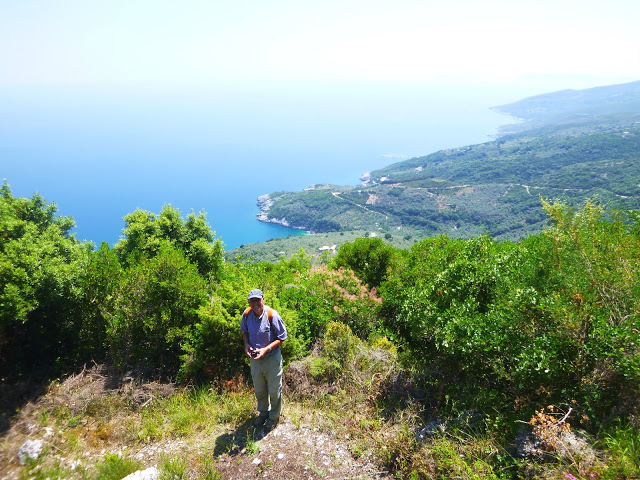 The path descends on the ridge of the large ravine of Milopotamos which is on the left. Indeed, at some point, we walk pretty close to the edge of the cliff. To the right at the distance we can see the monastery of Labidona (see the walk Milies-Labinou-beach). On our way, we pass above deserted olive groves and notice a short section of kalderimi. Αfter the newly built small chapel of Agios Nikolaos, we walk on an earth road, which leads ultimately to hotel Faros. On a right bend of the road we take the signed path to the left and get down to the streambed  of Milopotamos.
We pass to the other side over the bridge and climb either on the old kalderimi, or on the concrete steps, to get just below the restaurant. We continue down on the steps and finally come to the magnificent beach of Milopotamos. A swim in the crystal clear Aegean sea will make us instantly forget any difficulty we might have encountered on our way to here.
Posted by Kyriakos Stathakis at 9:03 PM No comments: 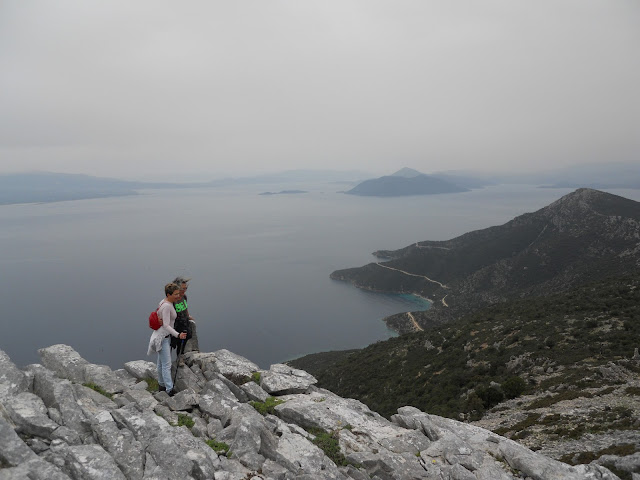 At the south end of the Pelion peninsula, after the gently descending foothills of Lafkos fade out, the rocky and arid mountain of Tiseon (previously called Bartzogia by locals) rises up. On its boundary, at the entrance to the Pagasitic Gulf, the village of Trikeri is built. There is no proper path joining Trikeri to the rest of Pilion, and communication was only by sea. However, there is a path from the village which goes along the mountain ridge and descends to the sea to the chapel of Panagia. 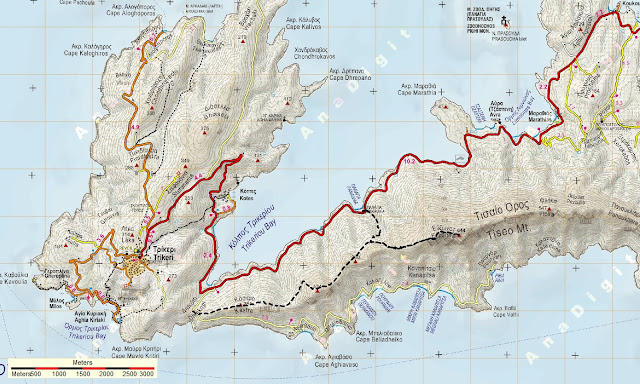 Going along the coast road from Milina to Trikeri, we pass the fish farm and then see a sign next to the road with the inscription ''ΙEΡΟΣ ΝΑΟΣ ΠΑΝΑΓΙΑΣ'' (in Greek). The chapel is a little lower down near the sea, not visible from the road. Next to the road there is also a fallen marble memorial plaque commemorating the fight in 1823 of the Greek revolutionaries under the leadership of Karatasos against the Turkish army led by Kioutachi pasha.
The footpath, indicated by red marks, begins here from the side of the road and ascends through the maquis vegetation. We pass through a first clearing and shortly come out at a larger long narrow one, called the Karatasos glade. Walking along its length, half way along we find the path to the left, indicated by red marks and a small sign, which leads towards to peak. Walking to the east, we come out at a new clearing on the col. 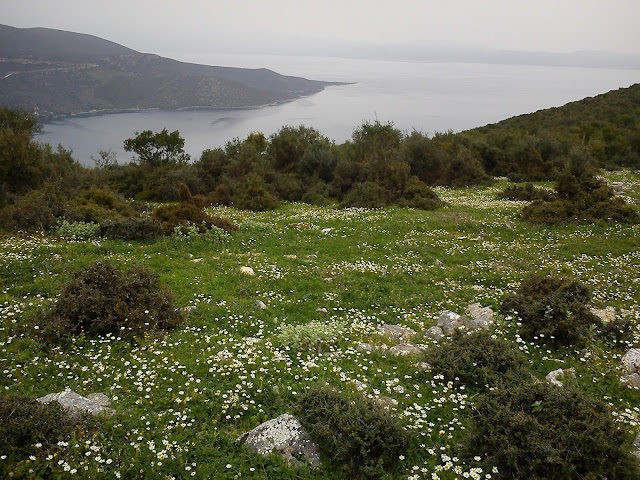 From the col we begin to ascend on goat tracks over rocky terrain with low vegetation which thins out as we continue climbing in an easterly direction. We pass successive cairns and keep to the southern edge of the ridge (towards the Aegean side). We eventually reach the highest point (644 m) where there is a cement column after about one hour and forty minutes of walking (two hours with stops).

From here, especially on a clear day, we can enjoy a unique view of Greek nature, which compensates us amply for any difficulty we may have had in reaching this point. At moments like these we feel fortunate to be in this much-afflicted place enjoying the magical and unique beauty that it has been blessed with. Rocks and cliffs, sky and sea, white and blue – we can’t take in enough of the view all around us. It’s not possible to describe the feeling – one has to experience it for oneself. In the words of the unforgettable Nikos Haratsis: “I don’t know, Lord, how else to sing the praises of this holy place that you have given us”. 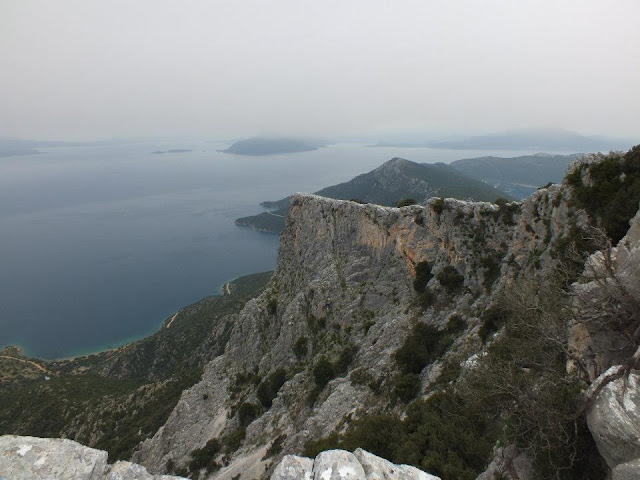 Comes the time when we must set out on our return. We go back to the Karatasos glade, from the upper (western) edge of which a path continues, marked by red marks, in a southwesterly direction. We pass a new clearing and, further on, the path becomes unclear as we ascend over a rocky hill, at the top of which there is an antenna.  In this recording, we go downhill on goat tracks under the antenna in a northwesterly direction until we meet a straight, narrow path a little further down, which we follow to the left (southwest) to come out at the glade on the col below the antenna. One reaches the same glade if one proceeds straight ahead to the southwest below the antenna going downhill, again on goat tracks.
From the glade, moving to the west, we ascend on a narrow path-goat track, pass another glade and go up to the top of the next hill. In the same direction, after a short distance, the path leads us to another hill (Kastro, 281 m), where we find a wall extending for quite a distance along the ridge, and we walk next to this. The wall was built hastily at the time of the battles with Kioutachis’ army in 1823 (more details are available in Kostas Liapis’ book (''Τα Παλιόκαστρα του Πηλίου'', Volos 2010-in Greek). 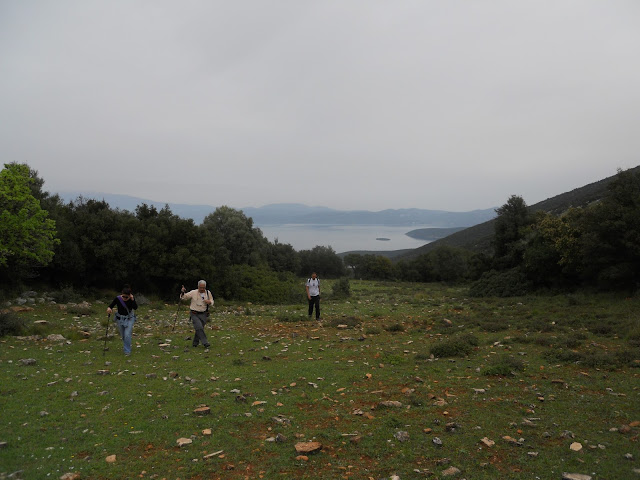 Continuing in the same westerly direction, we pass next to the asphalt road and take the narrow earth road which, after a short distance, comes to col next to a goat pen. Here we meet the asphalt road that leads left to Agia Kiriaki and the trail recording ends. If we cross the road and take the narrow earth road that we see to ascend the slope, we will reach the village of Trikeri in about forty five minutes. From there we can continue, if we want, for about thirty minutes (see the walk description Agia Kiriaki – Trikeri) on the well-maintained kalderimi that leads down to the picturesque coastal settlement –harbour of Agia Kiriaki.
Posted by Kyriakos Stathakis at 11:50 PM No comments: