Τhis route connects the two main tourist beaches of Pelion`s eastern coast, Chorefto and Ai Giannis, passing from another three beaches that lie in between (Agii Saranda, Banikas, Plaka). It is not entirely coastal though, as it reaches a maximum altitude of 190 meters.
Starting from the camping at the south end of Chorefto beach, we walk uphill on the asphalt.  The original path`s course followed the earth road on the left, that eventually ends at a fenced grove.  Unfortunately, because of a landslide, the path section at that spot now has collapsed and disappeared, so we have to pass through the fence, but the owner objects and does not permit passing through his property. So, to avoid any trouble, we prefer to follow the asphalt uphill.
At the third turn of the asphalt, we head straight to guesthouse ''ENASTRON''. Walking on the right side of the building, we continue straight ahead on a path which soon joins an earth road. We head left and then to the right, and pass just under a small hut on our left side. After that hut, the path is obvious and goes downhill to reach the narrow asphalt road leading to the beach of  Agii Saranda.
Having reached the large sandy beach of Agii Saranda, we walk to the other end and just after the statue on the rock, next to the taverna on the right, we start walking on an earth road going uphill. An earth road coming from the beach bar Monk joins in from the left.
After about seven hundred meters, we reach a junction where we head left downhill. Further down, at a sharp right bend of the road (attention!), we go straight ahead to find the only surviving section of the old path and we soon get down to the quiet pebbly beach of Banikas.
We cross the stream (called Mega Rema). To our left is a deserted house next to the sea and to the right a renovated cottage.
At the end of the beach is a third cottage and we take the earth road starting from there going uphill.
At a short distance there is a junction, and we take the narrow road to the left, passing just above the cottage leading to a grove. We keep climbing up steeply and at the upper edge of the grove we notice an unused concrete irrigation ditch. Following this, a few meters higher up we find the continuity of the path which ascends steeply in holm oak (quercus ilex) forest. The path may be overgrown at some spots, so it is advisable to wear long trousers. Eventually we come to an olive grove and continue straight ahead uphill to the chapel of Agios Charalambos.
Next to the chapel lies a wooden kiosk. We continue on the earth road and, after 150 meters at a right uphill turn of the road, watching on the left side (attention!), we find the continuity of the path. It goes down through jungle-like vegetation, crosses a small stream and then opens to another earth road, on which we walk to the left. After another 100 meters, at a left downhill turn of the road (attention!) we find the path on the right and keep going downhill. 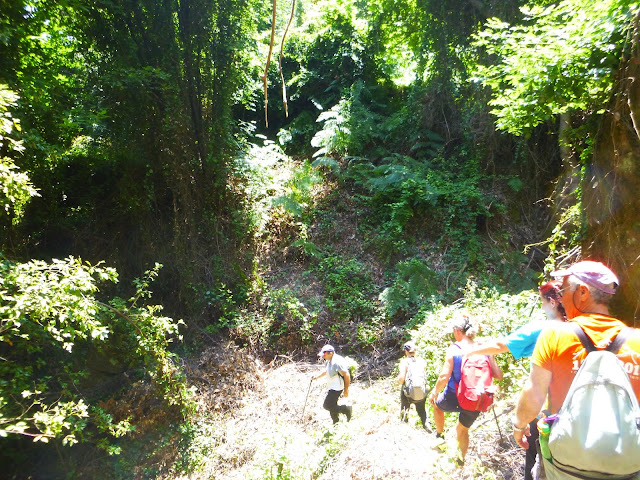 Further down, we join another earth road at a junction. Here it is highly recommended to continue on the road downhill for ten minutes, to reach the quiet  chapel of Panagia Faneromeni. Built on a rock just above the Aegean sea, this is an excellent and beautiful example of Pelion`s hidden treasures, an absolute gem. Take some time to relax in quiet and refresh drinking the cool water that comes from a spring through the rock.
Retracing our steps  back to the road junction, we now head left (south) on the road and after 500 meters we reach the fence of Hotel Eden. At that point we head left towards the sea (to the east), walking downhill on a path/kalderimi. Some sections of the old kalderimi have survived and others have been rebuilt, but unfortunately not to the best standard (the flat stones that were used can be slippery when wet-attention!).
We walk next to a kiosk with a fallen pole and soon end down to the excellent sandy beach Plaka, which, like Banikas, belong to the village Anilio. In the past this used to be a quiet, remote place (fortunately it remains unaccessible by cars), but nowadays the bar-restaurant of Eden hotel from above makes it more lively, by virtue of the loud dance music played all day in summer (thankfully not heard at the other end of the beach).
We continue along the beach to the south, pass over the rocks at the end of it and arrive finally to the tourist seaside settlement of Ai Giannis (Agios Ioannis).
Posted by Kyriakos Stathakis at 10:27 PM 1 comment: 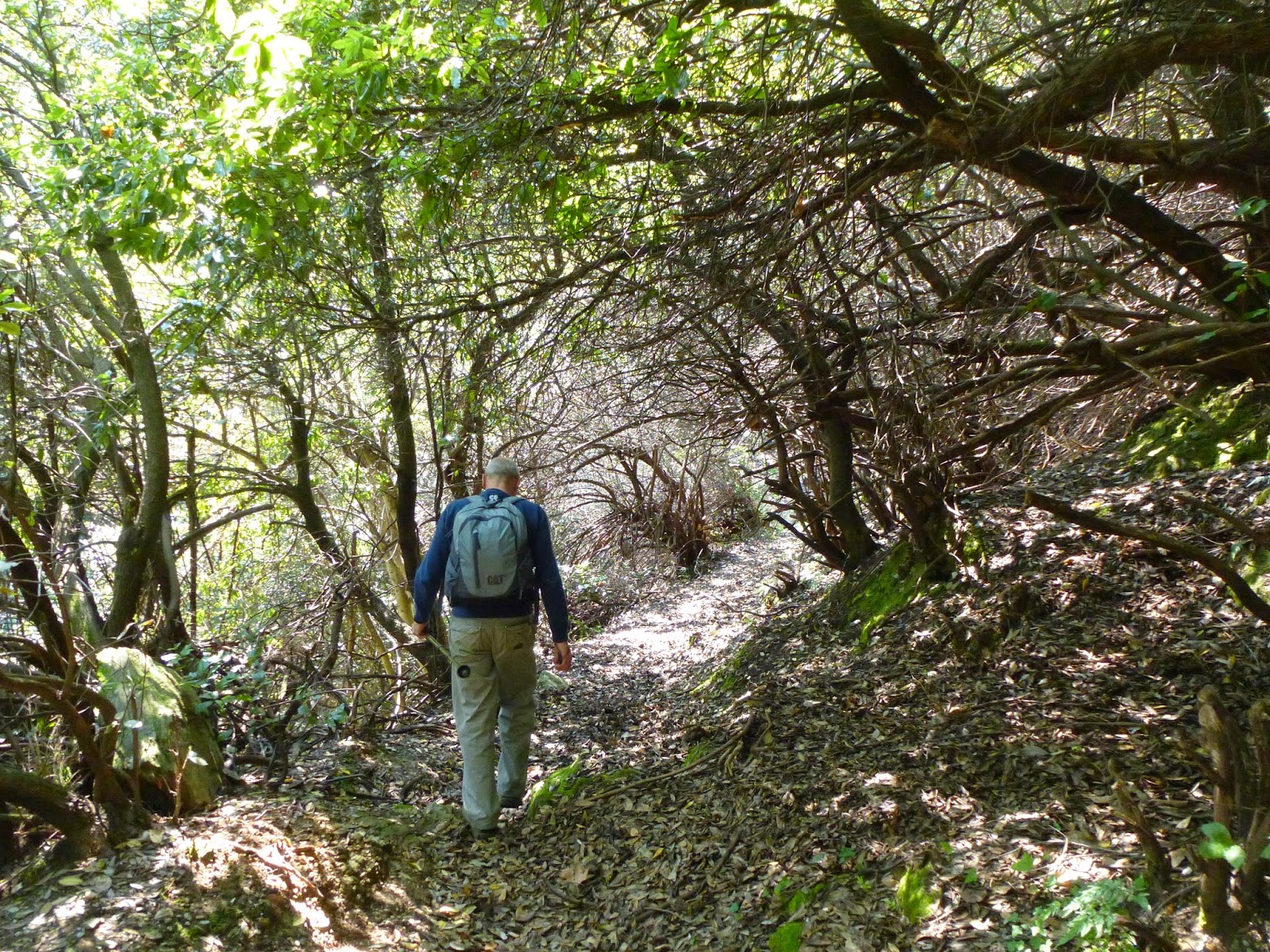 This is a magnificent walk. Part of the national trail O2, a long trek in one of the few virgin areas still left in Pelion.  On our way, we pass from the isolated beach of Limnionas, two old stone bridges and by the ruins of the deserted village of Palia Mitzela. In short, this walk epitomises the best of Pelion mountain`s wild natural beauty and be sure, if you have the chance to undertake it, that its memory will not fade away. 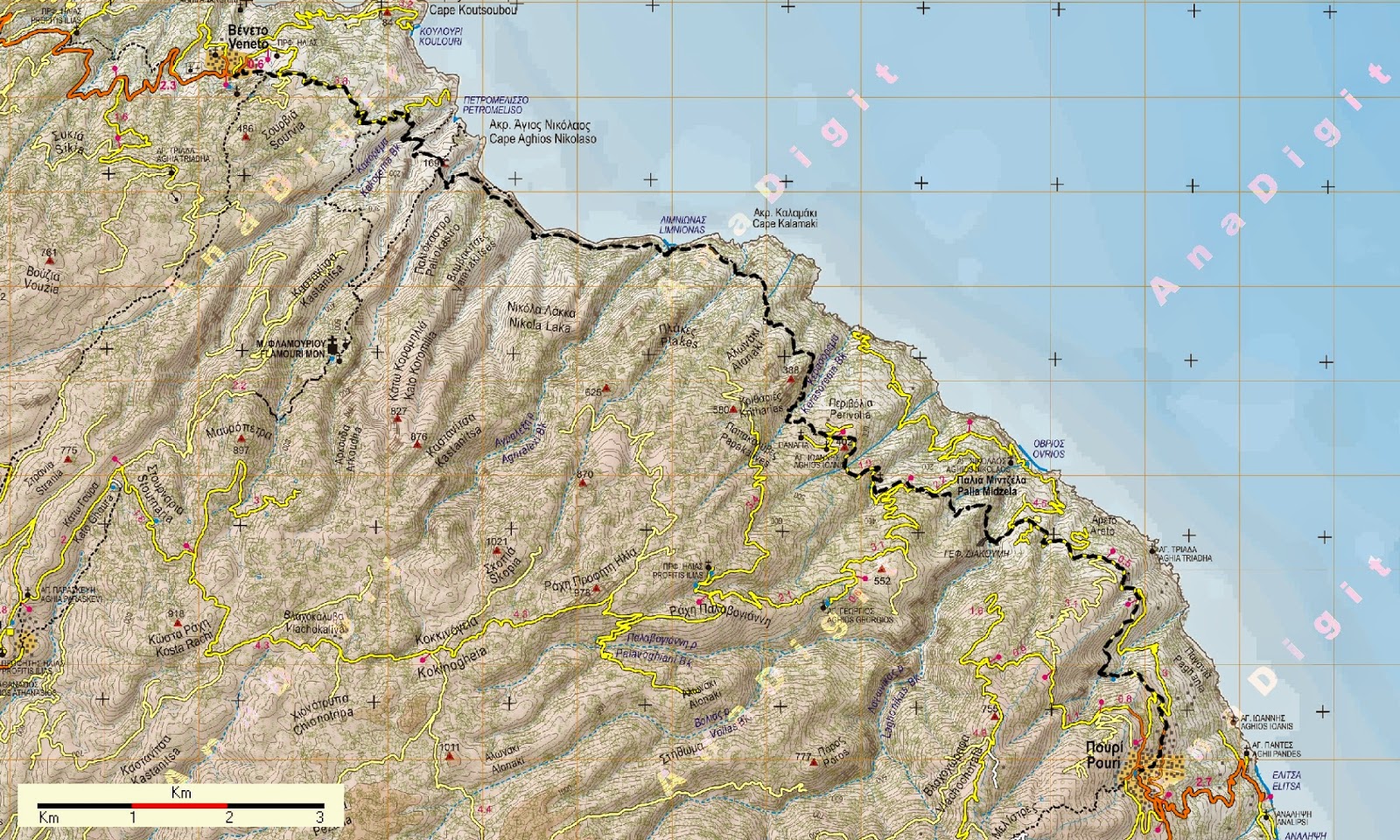 The most practical way to move is by tourist bus or taxi. Veneto lacks public bus service, but we can take the bus from Volos to Keramidi (www.ktelvolou.gr), and then either walk to Veneto in 5 hours (two routes, one direct and the other via Kamari) or take the taxi from Keramidi, tel. 6977893576. From Pouri there are two buses daily to Zagora. If we elect to start from Veneto, we have the advantage of walking in proximity to earth roads for the second half of the walk, so if a hiker develops a problem then, it is relatively easy to get help.  There is a restaurant open in Veneto (tel. 6989612016) and Pouri (tel. 6909454491) for food and drink. At Pouri there are two guesthouses to stay (Alisachne and Panorama). Recently, accomodation in Veneto is also available (Apartments Veneto), as well as in Kamari.  From Pouri, one can continue walking down to Horefto beach or up the mountain to Makrinitsa.

Starting from the parking lot of Veneto, we climb to the square nearby and then to the steps that open to a concrete road, on which we walk to the left (east). We pass by the chapel of Agios Nikolaos (there is a spring water fountain down below to the left) and exit the village, leaving on the right two crossings that go to Ano Kerasia and Flamouri monastery respectively. At the second pen on our way (now deserted), about half an hour from the start, there is a sign to the right to enter the path, which is going down to cross the large stream Kakorema. Bear in mind that from now on, more than four hours will pass until we meet an earth road again. 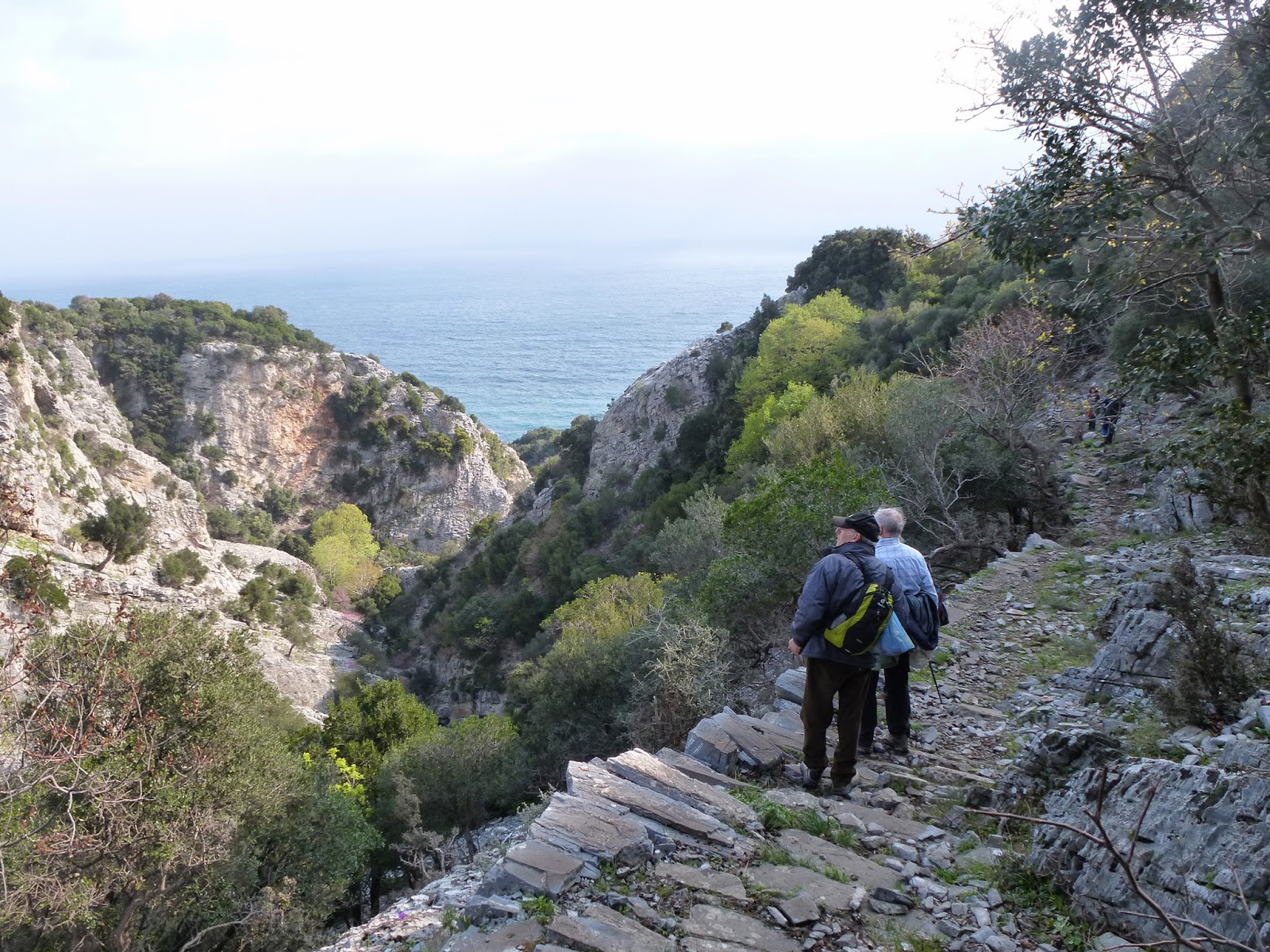 After crossing another stream, we climb to a rocky plateau and reach anοther pen. Here the path is unclear, but if we walk uphill for a few meters above the pen`s hedge, we will notice the red marks and find the proper path, which continues downhill to cross yet another stream, called Vathoulomeni. After this, we walk parallel to the coastline, thirty to fifty meters above the sea. On the left is a crossing to the ruined dock of Flamouri monastery (Agios Nikolaos). From a certain point, if we look back we can see the sea caves at the rocky coast, called Ipnoi in ancient times. At that coast, a considerable part of Xerxes` fleet sank in 480 b.C. during the Persian invasion to Greece.

Leaving two more crossings with blue marks on the right, leading to Paliokastro and Ano Kerasia respectively, the main path eventually takes us down to the bed of a large stream, called Agralexi. Walking a short distance into the streambed, we come to the isolated small pebble beach of Limnionas. Here we notice the existence of some ruins and an old well, remains from the times when this place was used as a dock for transporting wood and various goods (legal or illegal) by boats. Three hours have already passed since our start from Veneto. The path continues from the end of the beach, climbing up onto the wild wooded slope, heading gradually away from the sea.  Eventually, it opens to an earth road, on which we walk. It crosses a stream and then approaches a second larger ravine, called Kapnoutsi. Watching to the left as we walk down the road, we notice the O2 signs and find the path (cleared in November 2013, previously unpassable), which takes us down to cross the stream over the old stone bridge of Pirgakia. Built probably during the Ottoman era, it still remains in good condition, surrounded by lush vegetation and high plane trees into the virgin ravine.

After a while, our path opens out again to the earth road. In twenty meters we have a small spring water fountain on the right, a welcome sight (but will be dry in summer and autumn). After another fifty meters, watching out for it on the right, we find the path again, that leads us through the ruins of the village of Palia (Old) Mitzela. Destroyed by the Turkish Ottoman army in 1828 during the Greek revolution, it lays abandoned ever since. The remains of the main church of Panagia (Virgin Mary) were recently destroyed by illegal excavators searching for gold -an awful shame and disgrace.
After the institution of the Greek independent state, the village`s refugees were granted land near the state borders of the time, at Pagasitic gulf, were they built the New Mitzela (or Amaliapolis).
Leaving Palia Mitzela, we reach the large ravine of Lagonika and the path becomes stone paved (kalderimi) as it winds down the slope. We cross the stream over the excellent stone bridge of Diakoumi, also built in the Ottoman era by craftsmen coming from Zagori of Epirus, northwestern Greece - a testimony of the Pelion villages` thriving at the time. For more information on that subject, see Nikos Haratsis` photographic book ''ΠΕΤΡΙΝΑ ΤΟΞΩΤΑ ΓΕΦΥΡΙΑ ΣΤΟ ΠΗΛΙΟ'' -Stone arched bridges in Pelion (in Greek). Read also Werner Helwig`s book ''Raubfisher in Hellas'' (in German), based on the life and adventures of Alfons Hochhauser in that area of Pelion.
The path opens out to an earth road (which to the left goes down to Ovrios beach) and we walk on this to the right (east). After about two kilometres, as the main road takes a sharp left bend downhill, we head right to a narrow earth road and follow it, finding the path-kalderimi going straight ahead and cross  Kserorema stream, the last one to come in our way. Climbing up on the opposite slope, we meet a fountain, where spring water emerges from the rock, under a big plane tree.
We come to an earth road and follow it uphill for a short bit, then walk on even ground. At an angle to the right, an uphill concrete paved road also leads to Pouri. We prefer to head straight on, and soon reach a narrow asphalt on a sharp bend and follow it uphill.
Reaching the lower quarter of Pouri, we notice a spring water fountain on the right. From there we take the uphill stone paved path (kalderimi), leading us to the corner of the parking lot, which is located at the upper (main) quarter of the village, at the end of the bus line, close to the taverna.

Posted by Kyriakos Stathakis at 10:02 PM No comments: