Between the villages of Agios Vlasios and Agios Lavrentios lies the large and overgrown ravine of Koufala. There are two routes to cross the ravine, passing from the chapels  of Agia Irini and Ai Giannis respectively, so we can make a circular walk, as presented here.  Of course, we can walk one way in half the time.  There is a bus connection to Volos at both villages (www.ktelvolou.gr), as well as restaurants open all year round. 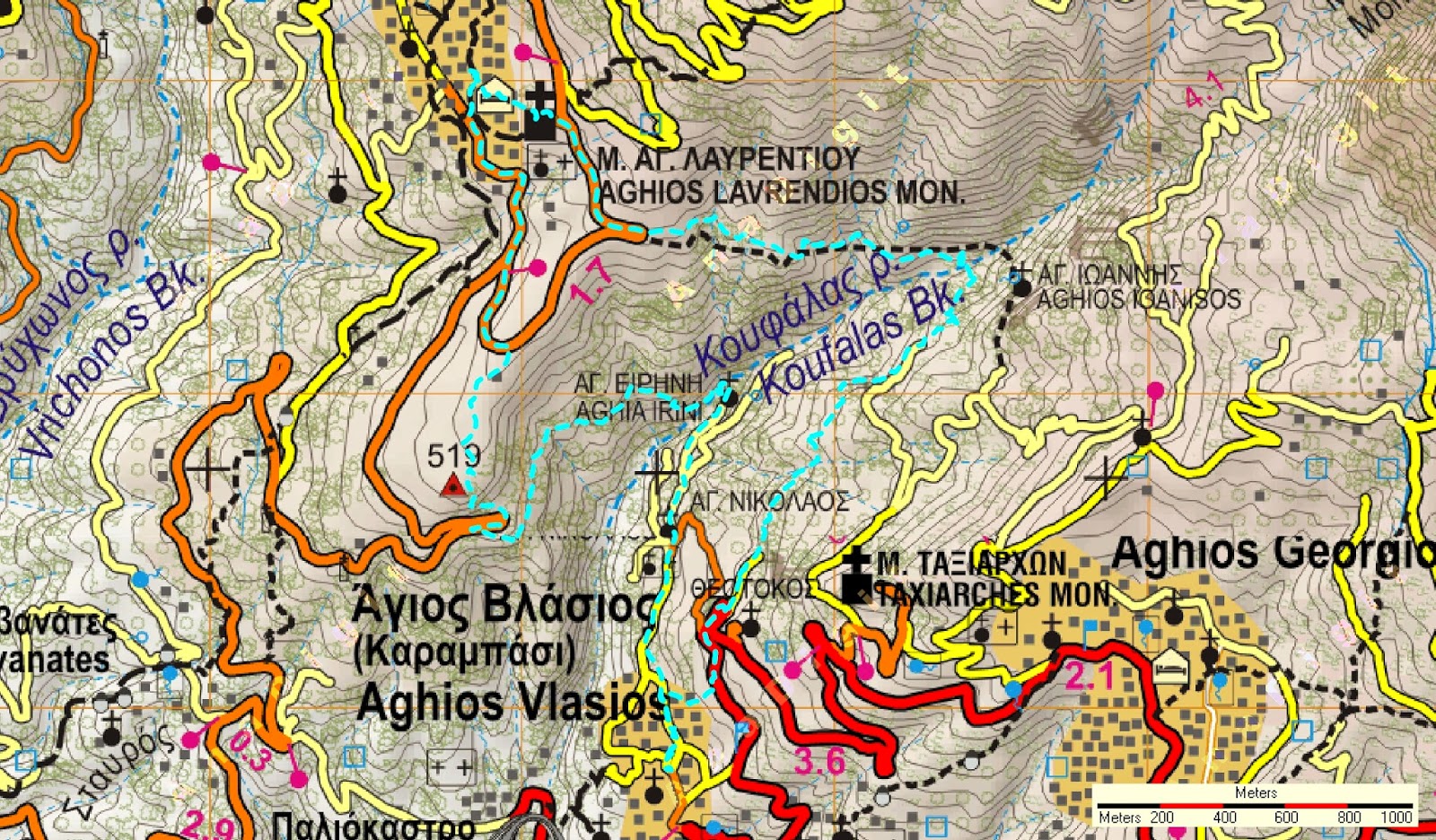 Starting from the main church of Agios Vlasios (the village used to be called Karabasi in the past), we descend to the adjacent square and walk on the uphill kalderimi heading to the north. Immediately there is a junction, where we take the kalderimi to the left. It soon gets covered by cement and we pass by a dry drinking water fountain built in 2003, according to the inscription. Heading north, we pass by the cemetery, then at two consecutive signed junctions we take the left road at both. The narrow earth road comes to an end at the chapel of Agia Irini, below a watermill (dristela) that was used for cleaning carpets and fabrics.
We cross the stream of Koufala over a concrete bridge and climb to the slope on a path with sections of kalderimi.  The path opens to an earth road, which we follow uphill until we get to the asphalt.  At the outer edge of  the subsequent sharp left turn of the asphalt, we find an uphill path that leads to the chapel of Profitis Elias, a suitable place for a stop.
We continue on the earth road and at the junction head right. There used to be a proper kalderimi to the village, but is blocked at present. Reaching the asphalt, we have the option to avoid passing through Agios Lavrentios if we want, walking to the right uphill until the sharp bend of the road. We walk to the left instead and follow the asphalt until the parking lot, then take the uphill kalderimi that leads to the village square.
At the lower corner of the square,  there is a marble memorial and a spring water drinking fountain and next to this begins an uphill kalderimi, which we follow. Further up we come to a dry water fountain and notice a cement road going to the left. However, we continue to the right on the uphill kalderimi which soon takes us to the monastery of Agios Lavrentios, which gave its name to the village. It is one of the oldest monasteries in Pilion, built in 1378 by the Athonite monk Laurentius on the foundations of an even older building (perhaps from the beginning of the 11th century) built by monks from Amalfi, Italy. At present it has three nuns and celebrates on March 10th.
An asphalt road runs along the top side of the monastery and we walk along this downhill. Further down, at a hairpin bend to the right, we find the path which descends straight into the Koufala ravine. Along the way we encounter increasingly common sections of kalderimi. 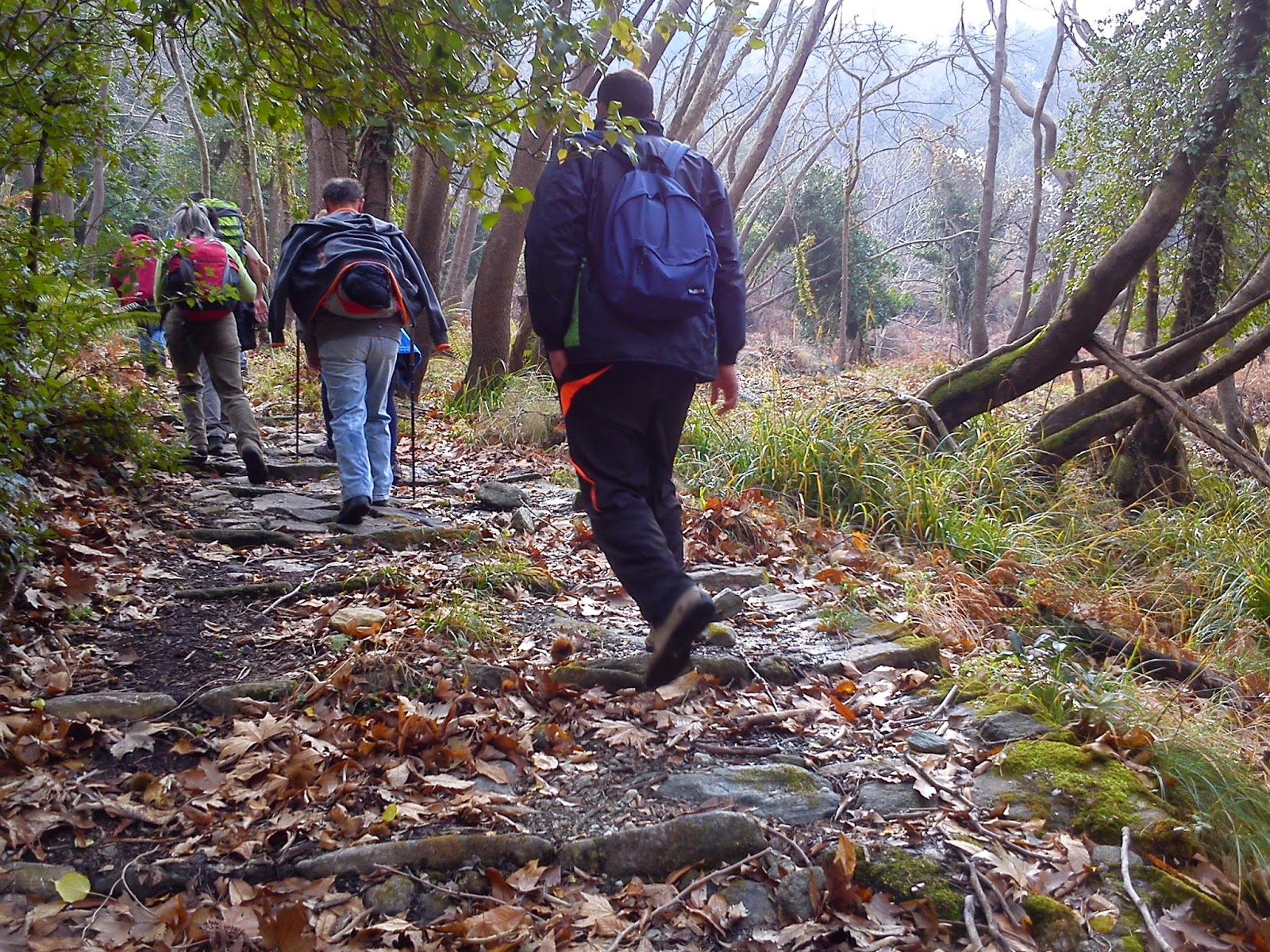 We cross the stream and then come across the chapel of Ai Giannis, next to a spring from which the water is led away by a cement channel. This cool, shady spot, equipped with benches and an open air grill, is especially suitable for summer recreation.
We continue walking on a path along the water channel, ignoring an earth road that sets off to the left (attention!). The path meets a stone hut, which features a watermill wheel at its north wall. Here we join a downhill earth road.
After 50 m. watching for the red marks on the left side, we find the continuity of the path next to the water channel. After a section of kalderimi, we join the earth road and again find the path on the left side after 100 m. (attention to the red marks).
Further down we join the road again as it becomes concrete paved and eventually joins the asphalt at a sharp bend.  After 200 m. on the asphalt downhill, after a junction with a road, we find the path on the right, marked with red marks. Going sharply downhill, it becomes a kalderimi and later is concrete paved. Reaching the drinking water fountain built in 2003, we turn left to return to the starting point at the main church of Agios Vlasios.

Posted by Kyriakos Stathakis at 1:18 AM