This route begins from Milies on a beautiful kalderimi and continues in the direction of Neochori until we reach the Panagiotiko dam. Then we follow the course of Platanorema stream, until the beach of Boufa (Koropi). There we can have a swim and then return to our starting point via the Boufa-Milies route thus completing the circle, or we can take the bus to Volos from the main asphalt road (timetables at www.ktelvolou.gr). Warning: a section of the route near the dam is difficult and less able hikers should take the alternate route on earth road (see further on). 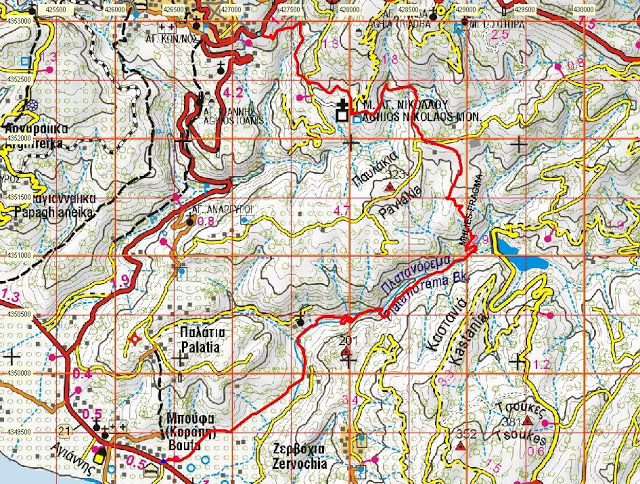 The first part of the walk is the same as the Milies-Neochori route. Setting off from the square in Milies, we follow the asphalt road downhill towards Volos. Eighty metres further down at a right hand bend in the road, just past a parking area down to our right, we branch off to the left onto a wide paved road that goes gently uphill. Reaching a crossroads, we take the paved road to the right and soon start to descend. This becomes a cement road and it comes out onto the asphalt road to Tsagarada at the last house of Milies, at a point where there is a mirror at a left hand bend in the road.
We descend on a beautiful kalderimi, which continues opposite, towards a stream bed with lush vegetation. Further down, at a bend in the kalderimi to the left, there is a branch to our right that used to serve people using the train station. For information, this branch leads to the main road to Milies at a sharp bend, 100 metres below the road junction that leads to the train station.
The kalderimi we are following, which is kept clear and in good condition, crosses the stream bed (Kakorema) and climbs up the opposite side with an olive grove to its right. When we reach the top of the ridge we meet an earth road. We cross this diagonally and follow the kalderimi towards Nochori, descending gently. Eventually we find another road which leads us a hundred metres further down to the old church of Agios Nikolaos, a remnant of the monastery that used to exist here. Here is a good place to have a stop. Unfortunately, we are not able to admire the notable frescos inside the church, as its doors remain locked.

Retracing our steps back, we easily find the continuity of the kalderimi on the other side of the road and follow it to the east. We cross two small stream beds, pass by an old hut and eventually the kalderimi ends, where it comes out onto an earth road, along which we walk uphill. The wider  area  is called Pavlakia.
Further up, we come out onto the earth road that comes from the settlement Stavrodromi.We go left (eastwards) and after a hundred metres we take the narrow earth road to the right (southeast), which brings us out at a flat area with a threshing floor to the left and a row of cypress trees to the right.
Here two paths cross. The path to Neochori goes off to the left after the threshing floor (there is a signpost), initially going downhill in an easterly direction, passes two small stream beds and comes out onto an earth road. Walking down on that  road, we can get to the dam (at two road junctions taking the right branch). This alternative route is a little longer, but has the advantage of avoiding some difficult spots of the shorter route we followed, which is described below. If you want to avoid difficulties, take the easy route.
The shorter but difficult path (as recorded here), after the cypress trees turns to the right descending to the south and fades out into parallel goat tracks, until it comes out on an earth track that has been opened as a fire break. We go down this for thirty metres and then bear left onto a path that is initially unclear (there are some red marks) but afterwards is well defined and zigzags downhill in a south-southeast direction until we come out at the slope opposite the Panagiotiko dam.
Here the ground has been changed completely by the construction of the dam, on the one hand providing water to South Pelion from the small artificial lake that was formed, but at the cost of destroying the old stone arched bridge that existed here (the bridge of Malamaki), of which only photographs are left now. You can see them in the photo book ''ΠΕΤΡΙΝΑ ΤΟΞΩΤΑ ΓΕΦΥΡΙΑ ΣΤΟ ΠΗΛΙΟ'' (“Stone arched bridges in Pelion” by Nikos Haratsis, in Greek).

We descend carefully down the steep slope (a task not up to everyone-also overgrown shrubs hamper progress) to get near the dam, where we have to cross a stream that runs next to it and to climb with a little difficulty onto the road. Walking down this road, we descend parallel to the stream, called Platanorema.
After a kilometer, we come to a right hand bend in the road crossing a small stream. Here a path branches to the left towards Afetes. At  the junction we take the earth track on the right, leading shortly to an abandoned waterwash for fabrics (dristella). The path descends, becomes a kalderimi for a short distance, and comes to the streambed. We cross it and on the other bank we notice an ascending path going towards Milies. We don`t take that, but walk on the bank following the stream and after a short distance we cross again to the left bank, where a water pipe taking water down runs along the path and leads down to the lower dristella. If we can`t cross the stream because of flooded running water in spring, then we have to return back to the earth road and follow it downhill for another 300 m. Watching on the right side, we will find a downhill path to descend to the lower renovated waterwash (dristella) at a beautiful area next to the stream bed.
Leaving the dristella, we walk along a path on the left bank of the stream and come out lower down onto the road. We walk for a short distance on the left bank of the stream and then cross over it, continuing on an agricultural road between olive trees and a few huts.
Further on, the road becomes  cement paved and comes out onto the main asphalt. Walking along this to the right, in five minutes we reach the church and the bus stop. Our recorded walk ends here. If we want to have a swim at the beach, we walk down the narrow asphalt road to the left, passing by the hotel ''Saily''.

Posted by Kyriakos Stathakis at 6:35 PM No comments:

In this circular walk, starting from the seaside at Kala Nera, we climb up to the square of Milies, following the route of the main kalderimi. Then, we return on a more easterly kalderimi, which follows the course of the Miliotiko stream. If we walk in the springtime, the stream will have plenty of running water and the olive groves on our way will be blossoming with wild flowers. Milies and Kala Nera are tourist destinations and have many tavernas, cafes and hotels open all year round. Bus timetables can be found at www.ktelvolou.gr 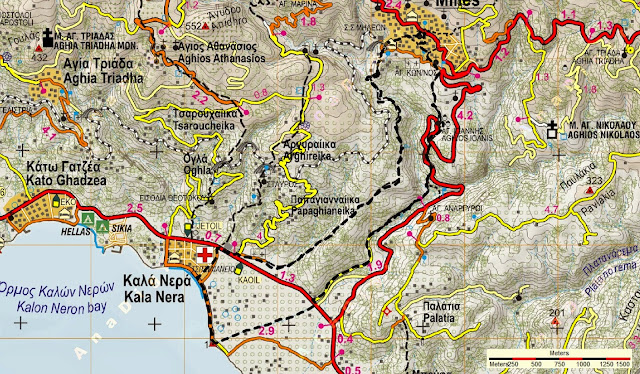 We set off from the beach at Kala Nera, where there is a kiosk and a sign indicating bus turn, and walk on the asphalt road away from the sea. We soon reach the main asphalt road, where we turn right (to the east) and walk for a hundred meters, after which we find a road to the left with a sign to “Argyreika” (''Αργυραίικα''). We take this turning, at which there are a few cypress trees. After a few meters, there is another crossing, at which we head right onto a narrow cement road that runs parallel to the asphalt road. This takes us to the Kala Nera cemetery, after which we continue on an earth road. After a hundred meters, this road bears left into an olive grove. After a few meters (keep your eyes open here!), we bear right into the olive grove and immediately find the kalderimi, which is in good condition and gently climbs up to the ridge above.

Further on, we bear right onto an earth road, which we follow for a hundred metres and then find the continuation of the kalderimi on our left. We walk between olive trees, seeing Milies nicely in front of us. On our right is the Miliotiko stream and we begin to make out the sound of the running water. We cross the river on a cement bridge and zigzag up the hill on a wonderful kalderimi, meeting the first houses of the village in the area known as Giftakeika.

A little further up we come out onto the asphalt road, which to the left leads to the train station. We cross this and climb with the church of Ag. Georgios to our right. Climbing continuously, we pass a small bridge and further up by the house of Daniel Filippidis, one of the three teachers at the Milies higher school in 19th century. We eventually reach the village square, with its remarkable main church, worthy of a visit inside.  It is a place where we will definitely want to stop!

We now begin our return to Kala Nera. From Milies square, we walk down the main kalderimi that goes towards the train station and after eighty metres, when we reach the house of Daniel Filippidis, we turn left  to ''ΦΙΛΙΠΠΙΔΗ'' Street (rather a kalderimi). We continue straight ahead downhill on the kalderimi, ignoring any turnings uphill or to the right, and soon reach the nice small church of Agios Konstantinos and Eleni.
After the church, we come out onto the asphalt road to the train station, we cross this at an angle and continue on a paved track-kalderimi. Close by on our left is the asphalt road between Volos and Milies.
A little further down we cross another narrow road that leads to the village graveyard. On our left it a group of mansions. The kalderimi continues downhill through a virtual tunnel of vegetation. Further down (watch out for this) near the asphalt road it appears to turn right and, passing by the chapel of John the Baptist a little down below, finally comes out onto the road. Exactly at this right hand turn, our kalderimi continues straight ahead. Until December 2015 this section was completely closed for thirty metres by vegetation but now it is cleaned and open.

On our way we cross  the asphalt road twice at an angle to find the calderimi again on the other side.  A little further down we meet another kalderimi junction. One branch turns left leading to the stone bridge of Tsipokalamos and ultimately Boufa (Koropi). The narrow path on the right goes to the nearby small chapel of the Birth of the Virgin Mary, chocked by lush vegetation. We continue straight ahead down the wide kalderimi and descend to the riverbed of the Miliotiko gorge.

Finally, we come out onto an earth road, which we continue to follow along the right hand river bank until we reach the main asphalt road. We cross this and continue straight ahead on the earth road next to the river, until we reach the sea next to the army summer camp (KAAY). Walking along the seaside road to the right, we soon return to the starting point  of our walk.

Posted by Kyriakos Stathakis at 10:04 PM No comments: