Hania-Waterfalls-Makrirachi (Path of the Waterfalls)


This extraordinary walk follows the course of the Megalo Rema stream, which runs between the villages Makrirachi and Anilio and has water running throughout the year. The path remained unknown until 29/5/2016, when we walked it for the first time. It was researched, cleaned and signed by volunteers from the Association of Makrirachi and Volos Alpine Club. On our way, we cross the stream at several places where its plentiful running water creates impressive waterfalls and ponds. So, it was only natural to call it ''Path of the Waterfalls''.
In 2019, a new path section was opened and signed at the final section of the route, from Kavouria waterfall to Makrirachi. The new path runs through the wild north bank of the gorge, thus avoiding completely the boring earth road on the south bank via Panagitsa chapel. Of course, we can always follow the old easier route if we choose to. On the new path, a signpost indicates a short detour to visit the high rock of ''Aetofolia'' (''Eagle`s Nest''), an excellent view point.
UPDATE 2020 -ATTENTION: THE PATH TO STEFANIA-AETOFOLIA IS CLOSED BY LANDSLIDES AND VEGETATION-IT IS ADVISABLE TO FOLLOW THE OLD ROUTE VIA PANAGITSA AS DESCRIBED BELOW.
The new route via Stefania-Aetofolia:


Powered by Wikiloc
A practical way to do the walk, is to leave our car at Hania at the first parking lot on the road to the ski center and return with the afternoon bus (starts from Agios Ioannis beach), which passes daily from Makrirachi towards Volos at 17.15' during the winter season and at 18.00 in summer season (see www.ktelvolou.gr). We can also return to Hania walking on the kalderimi of the main route Hania-Makrirachi, in 4 hours, starting from the square.  Another option is to continue walking to Anilio and then to Agios Ioannis (this will take about two  hours), or even walk down the asphalt to the beaches of Agii Saranda and Horefto. At Makrirachi there is a cafe-restaurant open all seasons and a hotel too (Astromeria). 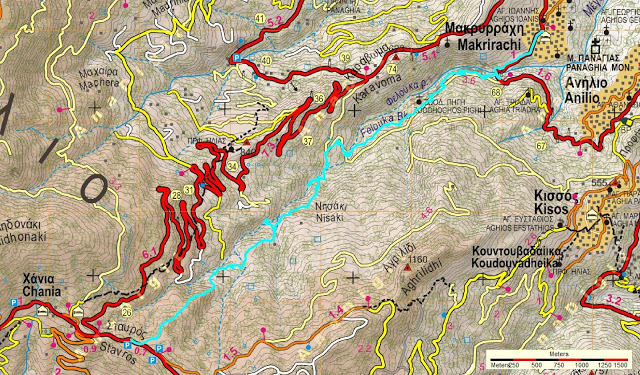 Starting off from the first parking lot, on the road to the ski center, we initially walk on the asphalt uphill. After 50 m., watching out on the left for the red paint mark and the walker sign on a beech tree, we find the path and start going slightly downhill in beech forest. 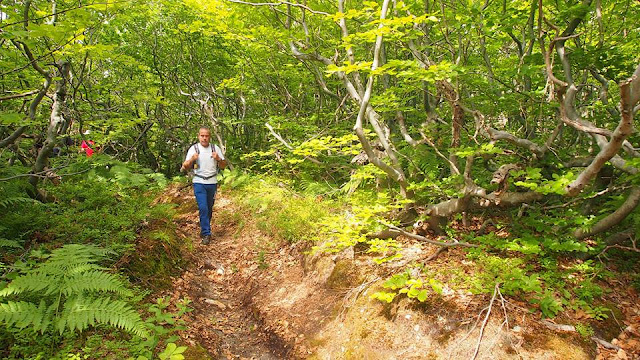 We cross a small stream and then walk on a ridge in a northeasterly direction between low beech trees. To the right we can see Agriolefkes peak (1470 m.) and the ski slopes.
At a certain spot, we cross the ruins of an old stone building. The path becomes more steep but is well signed and there is no chance to get lost. Eventually, we reach an earth road junction. The uphill road leads in fifty meters to a shelter hut, built by hunters of Makrirachi, a good place to have a stop.
Returning to the junction, we take the road heading east, noticing the signpost. It crosses a stream and then, at the point where it takes a sharp right bend, we leave it walking on a straight line downhill in the beech forest. A path section is unclear, but the red marks help us find the way.
We cross a stream and reach an earth road.  Here we definitely must take a short detour to the left to visit the waterfall at Plakotoura. The road ends in 100 m. as it comes to a stream. The water, after forming a small pond,  runs into a canal in the rock.
Following this, we come shortly in front of a magnificent 15 m. high waterfall falling from the rock and joining the water that runs underneath. An irrigation canal was dug by the villagers of Makrirachi at this spot centuries ago during the Ottoman era, to water groves further down. It is a good thing to sit for a short while on the rock to enjoy the powerful feeling.
Returning back, we follow the earth road in a straight line, ignoring two junctions to the right. Coming to a spot where a big tree is fallen blocking the road, we go down left following the red marks and then to the right, on a path traversing the slope. We walk by two ruined old huts and then cross a concrete irrigation ditch. If we follow this to the left, we will shortly reach another beautiful spot at the streambed where the ditch begins. Only problem is, it is unsuitable for people with fear of heights.
After crossing the irrigation ditch, the path descends down to the streambed.  Water runs fast under the plane trees on the rock and forms a large pond underneath, suitable for swimming if one can withstand the cold water. This location is called ''Poros''. A path on our right (without signs) leads down to the pond.
We cross the stream and the path at the opposite bank opens to an apple grove, through which we walk and join a road, paved with cement (there is a signpost at the junction). Uphill to the left, this  road leads in less than half an hour to the location ''Karavoma'', where it meets the main route Hania-Makrirachi, which can be used to return to Hania on foot in about 3 hours.
We walk on the road downhill. Further down it takes an 'S' bend and, twenty meters after that bend (attention!) we leave it to the right going into a grove, following the red marks. A signpost lies at the junction. We enter the beech forest and soon reach the streambed again. This area is called ''Kavouria'' (''Crabs''), due to the crabs that used to live here in the past. At present times, however, we came to notice some small frogs on our way, but no crabs at all.
Here, plenty of streamwater falls on the rock and creates another impressive waterfall and a pond underneath. Erosion by water creates elaborate patterns on the rocks. Another long stop here is mandatory. 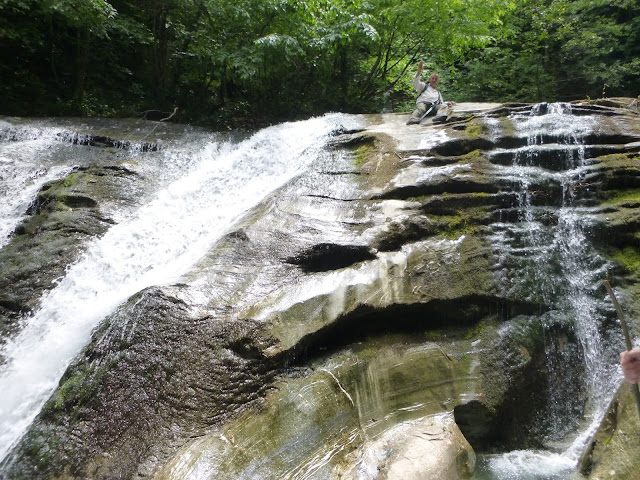 Now, if we are to follow the new route, we don`t cross the stream, but return back to the signpost at the junction and follow the road downhill (towards ''Stefania''). From the end of the road we continue on a narrow and sometimes steep path through wild vegetation. Further on, we join another road going downhill. We keep following the red marks, hearing trhe streamwater flowing down below us, and at some point further on, watching for it on our left, we notice the signpost indicating the detour to ''Aetofolia'' viewpoint. So, we leave the main path and climb the slope on the narrow steep path to reach the high rock of Aetofolia, offering a fantastic view to the overgrown gorge from Hania to the village of Anilio which we see below.
After having enjoyed enough, we retrace our steps back down to the main path and continue through wild holm ovillage square.ak forest. We walk next to an open water tank. Eventually we come down to the main asphalt at the entrance of Makrirachi and walk on it for a few more minutes to get to the village square.

If we choose to follow the old route on the south bank via Panagitsa, then we have to cross the stram  at Kavouria waterfall and continue  on earth road in chestnut forest. We go past a junction with a road to the right leading ultimately to Anilio and Kissos. We continue following the course of the large ravine, viewing the wild overgrown opposite bank.
Walking on the road, we reach the small chapel of Panagitsa (Virgin Mary). Next to it, drinkable water runs from a tube.
We go past another junction with a road to the right and keep following the course of the stream downhill. After five minutes, there is another section of the path on the left, marked with red paint. We can follow either the road or the path, which eventually comes down to the riverbed  and then joins the road again.
Eventually the earth road, now paved with cement, opens down to  the bridge of the main asphalt road at the location ''Felouka''. Next to the bridge is a greenhouse (Makrirachi and Anilio have a large production of plants). We turn to the left, cross the stream over the bridge heading north and after 900 meters on the asphalt we finally reach the square of Makrirachi.